"...the music would vibrate and glitter around you, with the bewildering but satisfying precision of a dream." -New York Times

Our CD "Outrages and Interludes" is now available on the Innova label!

Thank you for contacting us. We will get back to you as soon as possible
Oops. An error occurred.
Click here to try again.

It's so easy..just text LETRAINBLEU to 22828.  You will immediately receive a reply asking for your Email address, and that's it!

Our recent collaboration with Lar Lubovitch

We once again collaborated with the Lar Lubovitch Dance Company!  We repeated our debut performance of Stravinsky's edgy Histoire du Soldat in New York for three sold-out performances, February 10-12.  The story of a soldier who makes a pact with the Devil, it was designed to be danced, acted and played.  This time around, the three actors telling the story were Broadway and Hollywood's Reed Armstrong, downtown singer-songwriter star Corey Dargel, and the famed offscreen singing voice of Audrey Hepburn, Natalie Wood, Deborah Kerr, and Marilyn Monroe: Marni Nixon.   It was quite a show!

celebrated flutist and conductor RANSOM WILSON.  The group features some of the most artistically compelling young musicians in New York, who are hand-picked for their brilliance as well as their expressive qualities.  Le Train Bleu dedicates itself to the highest levels of excellence and excitement in the performance of new and unusual music, with a few acknowledged masterpieces in the mix as well.

You helped us present our January concert!

Thanks for your donations and to Indie GoGo for hosting our campaign!

OUR DEBUT GETS A RAVE FROM THE NEW YORK TIMES!!

Succumbing to Temptation (and the Devil) in a Quest for Money

“Histoire du Soldat” should be “read, played and danced,” wrote its composer, Stravinsky, and its author, Charles-Ferdinand Ramuz, when the work was first performed in Lausanne, Switzerland, in 1918. And although the piece is often presented as a musical suite, those instructions have frequently been taken to heart. With its crisp narrative — a soldier sells his violin (and thus his soul) to the Devil, fights to win it back, but ultimately loses it again — its dance-rich, jazz-influenced melodies; and its dramatic text, “Soldat” (“The Soldier’s Tale”) offers abundant collaborative possibilities. 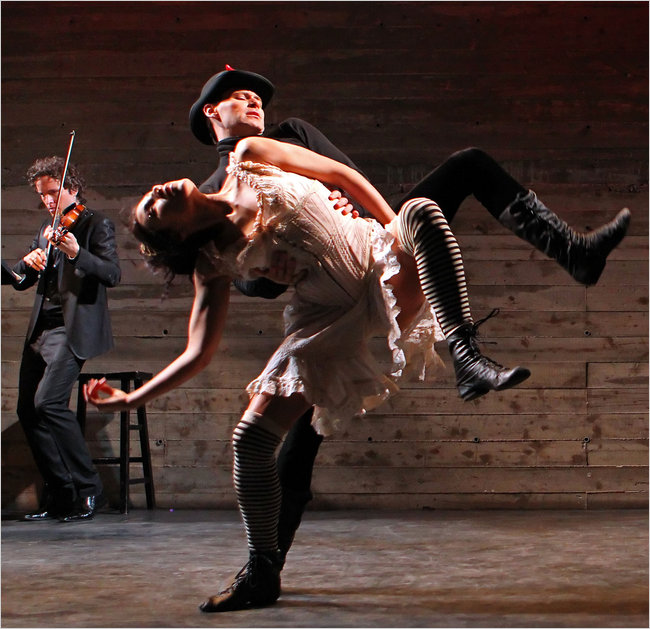 It has been taken up by all sorts of musical, theatrical and choreographic luminaries (John Cage once played the Devil, making a lot of noise, according to Elliott Carter, who was playing the narrator, alongside Aaron Copland as the Soldier. And in a one-night-only production at the Galapagos Art Space in Dumbo, Brooklyn, on Wednesday night, the conductor Ransom Wilson introduced his new ensemble, Le Train Bleu, in a version of the piece choreographed by Lar Lubovitch and shaped by a dramaturge, A. Scott Parry.

It was a riveting hour and a brilliant setting for “Soldat,” perfectly suited to the jazz-ensemble feel of the six-member group of musicians, even though Mr. Lubovitch had only half a small stage to work with. Aside from that handicap, the choreographer also has a tough task because the text (here a colloquial English translation from the French by Michael Flanders and Kitty Black) is so dramatic as to make danced exposition seem vaguely superfluous.

Mr. Lubovitch occasionally falls into that trap, but for the most part, he finds ingenious ways to deploy the limited space, deepening our sense of the music’s spare yet rhythmically complex instrumentation, and suggesting facets of the Soldier’s character that aren’t overtly present in the text.

At the start his Soldier (Reid Bartelme) enters to a brisk, military beat, with exaggerated, falling-forward marching steps. But once his soldierly identity is established, Mr. Lubovitch gives the steps a rag-doll, floppy-legged quality that suggests the character’s vulnerability to the temptation that the Devil (Attila Joey Csiki) will offer in the form of a book that has the secret to wealth.

That puppetlike movement is reminiscent of the Fokine-Stravinsky ballet “Petrushka,” as is the propulsive folk-dance violin solos, played with wonderful vividness and accentuation by Tim Fain. (The percussive emphasis of “Soldat” also frequently recalls “Petrushka”: the Devil, like the Moor in that ballet, gets a dance to a drumming beat.)

Under Mr. Wilson’s baton, the Train Bleu ensemble was both incisive and joyous in execution. The actors, William Ferguson (the Narrator), John Arnold (the Soldier) and Reed Armstrong (the Devil) were enthralling storytellers, the dancers (particularly Mr. Csiki) theatrically compelling. Jennifer Tipton’s lighting unobtrusively created a sense of shifting place and space. The only caveat? The production’s one-night stand. Bring it back!